I hope that you saw my Letter to the Editor in last Friday’s Boston Globe responding to Jeff Jacoby’s reckless opinion piece on Extreme Risk Protection Order or “red flag” laws. I am copying it below in case you missed it or do not have access to the Globe. I have also included the text for those of you who want to read it. 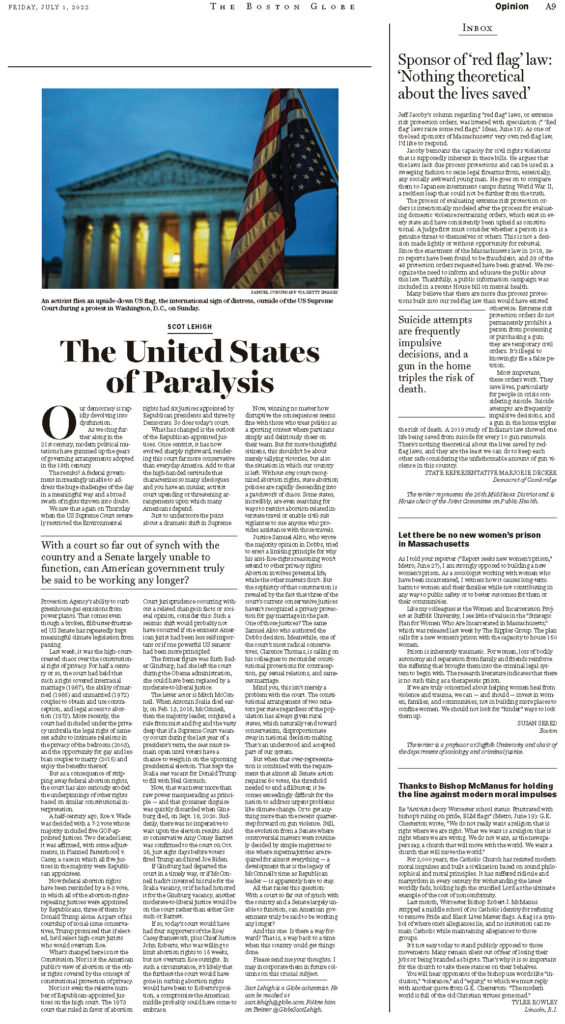 Jeff Jacoby’s column regarding “red flag” laws, or extreme risk protection orders, was littered with speculation (“ ‘Red flag’ laws raise some red flags,” Ideas, June 19). As one of the lead sponsors of Massachusetts’ very own red-flag law, I’d like to respond.

Jacoby bemoans the capacity for civil rights violations that is supposedly inherent in these bills. He argues that the laws lack due process protections and can be used in a sweeping fashion to seize legal firearms from, essentially, any socially awkward young man. He goes on to compare them to Japanese internment camps during World War II, a reckless leap that could not be further from the truth.

The process of evaluating extreme risk protection orders is intentionally modeled after the process for evaluating domestic violence restraining orders, which exist in every state and have consistently been upheld as constitutional. A judge first must consider whether a person is a genuine threat to themselves or others. This is not a decision made lightly or without opportunity for rebuttal. Since the enactment of the Massachusetts law in 2018, zero reports have been found to be fraudulent, and 39 of the 48 protection orders requested have been granted. We recognize the need to inform and educate the public about this law. Thankfully, a public information campaign was included in a recent House bill on mental health.

Many believe that there are more due process protections built into our red-flag law than would have existed otherwise. Extreme risk protection orders do not permanently prohibit a person from possessing or purchasing a gun; they are temporary civil orders. It’s illegal to knowingly file a false petition.

Most important, these orders work. They save lives, particularly for people in crisis considering suicide. Suicide attempts are frequently impulsive decisions, and a gun in the home triples the risk of death. A 2019 study of Indiana’s law showed one life being saved from suicide for every 10 gun removals. There’s nothing theoretical about the lives saved by red-flag laws, and they are the least we can do to keep each other safe considering the unfathomable amount of gun violence in this country.

The writer represents the 25th Middlesex District and is House chair of the Joint Committee on Public Health.